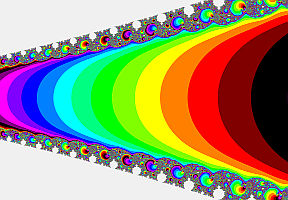 Using a color palette with a small number of colors entails visible gradations of the individual colors. By increasing the finesteps and the palette size equally (same factor) 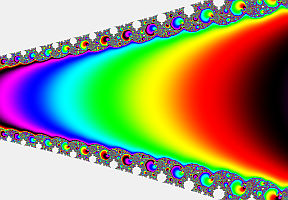 the gradations will change to smooth transitions, without modifying the picture in other respects. Only the offset-adjustment should be also adapted, so that the colors have the same position on the image as before.

On the contrary, when you change the number of colors and the finesteps in opposite directions, or vary only one of that: 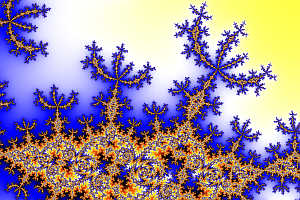 Then the same area looks like in the right picture, and in the former confusion you can see more details, whereas the color gradients in the upper area of the picture are nearly unicolored. Increasing the number of colors once more results in this: 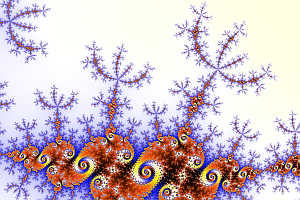 Thus the same area can look very differently, depending on the palette size and adjustment of finesteps. 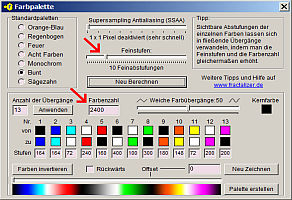 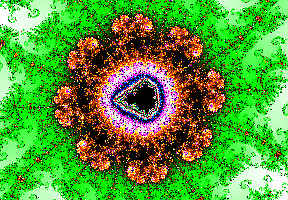 For as quickly as possible computing the supersampling can be adjusted to 1 x 1 (deactivated), but this will possibly impair the picture quality (like in the left picture). 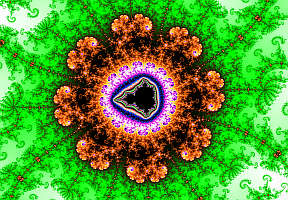 A higher supersampling adjustment will compute for every pixel a whole block of pixels and calculate the average color. For zooming and adapting the color palette a fast computing is an advantage, but if you want to save a picture, it should be computed in higher quality before (for instance with supersampling 5 x 5). 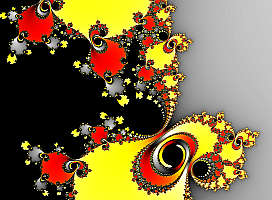 If there are gaps at the verges and in the center of helixes, you can increase the depth in the area-window. 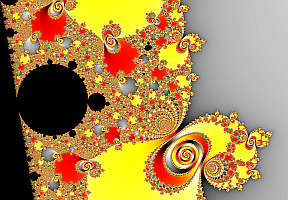 In the right picture the depth was increased tenfold. The black gaps are closed, and the verges show the typical form of the Mandelbrot set.

Such helixes like in the lower area of the picture are to be found in the peaks, which are pointing to the center of the Mandelbrot basic form. In the left pic the helix windings have different colors. 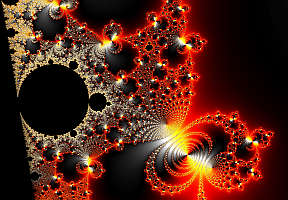 Especially interesting effects arise by adapting the palette size exactly so, that the colors are accurately repeated in every winding. Then the same area looks like in the right picture.